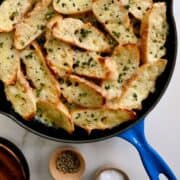 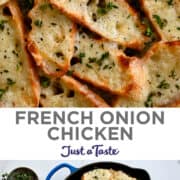 How to Make French Onion Chicken

When the comfort food cravings strike, I am all about a hearty, easy (and this one also happens to be cheesy) one-pan meal. That’s exactly what French Onion Chicken delivers!

This flavor-packed recipe all cooks in a single skillet, including tender chicken breasts, caramelized onions and even the cheesy toasts, which are arranged atop the chicken mixture and then melted under the broiler.

How to Caramelize Onions Quickly

Flavor-packed and incredibly versatile caramelized onions are a great staple to have in your recipe repertoire. Aside from starring in this recipe for French Onion Chicken, they’re also a great addition to burgers, pizzas, salads, bowls and so much more. The only issue? Watching onions caramelize is like watching paint dry. It takes… forever!

The best way to speed up the caramelizing process is to add a small amount of water to the onions while they cook. Doing so helps them quickly steam and then the liquid gets evaporated, so you’re left with glorious, deep-golden brown onions.

The final step in this recipe is to top the chicken mixture with a layer of French baguette toasts, and then pile on the extra-creamy shredded Gruyère cheese. Pop the skillet in the oven and you’re 3 minutes away from digging in to the ultimate spin on a French classic! 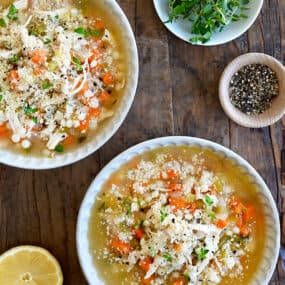 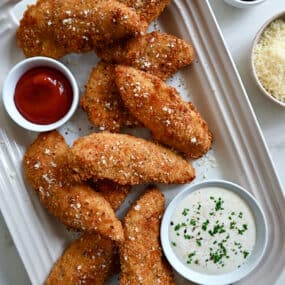