Enjoy tender pulled pork in a fraction of the time with a quick and easy recipe for Instant Pot Barbecue Pulled Pork topped with sweet and tangy zucchini pickles.

We’re going full-steam ahead into all things summer around here, which means it’s time for barbecue, boozy popsicles and no-bake desserts. While I’m all for pulled pork that’s slow-smoked and finished off on a hot grill, sometimes I need my barbecue fix faster and with less prep (and less mess). 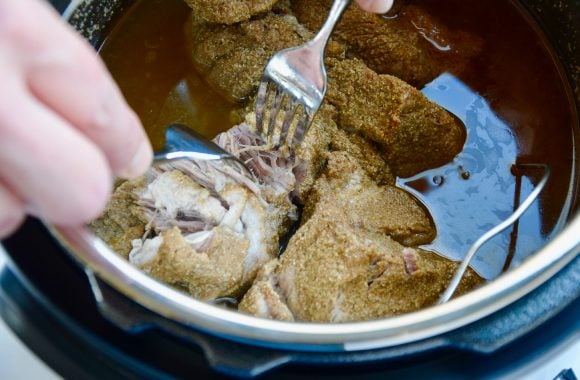 Instant Pot Barbecue Pulled Pork is just as juicy and tender as the classically prepared version, except it’ll be piled onto buns and stuffed into tortillas in 60 minutes or less.

While I’ve been a longtime slow cooker enthusiast, life seems to be going at warp speed lately (maybe because of these two little guys!), so I need my cooking to keep up. What is achieved in 8 hours in a slow cooker can be achieved in a mere 1 hour in an Instant Pot. What’s not to love about saving 7 hours of prep time? 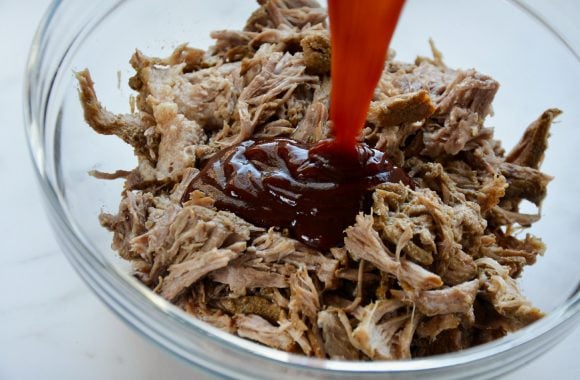 I toss this insanely tender pulled pork in store-bought barbecue sauce, but if you’re feeling extra (and have a little extra time), homemade Root Beer Barbecue Sauce would be a show-stopping addition. Speaking of additions…

Check out those crinkly zucchini pickles on top. Yes, zucchini! A quick brine flavored with garlic and spices adds big flavor to summer’s star produce. Read on for the recipes! 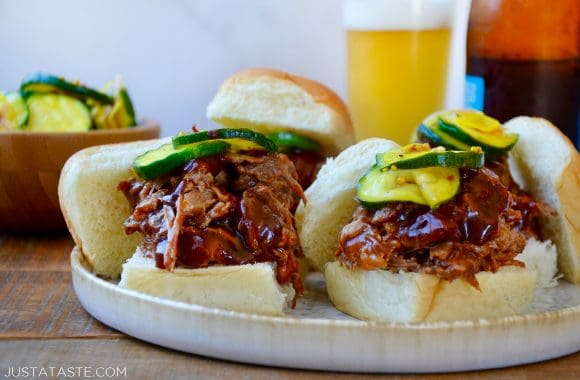 Enjoy tender pulled pork in a fraction of the time with a quick and easy recipe for Instant Pot Barbecue Pulled Pork.
5 from 1 vote 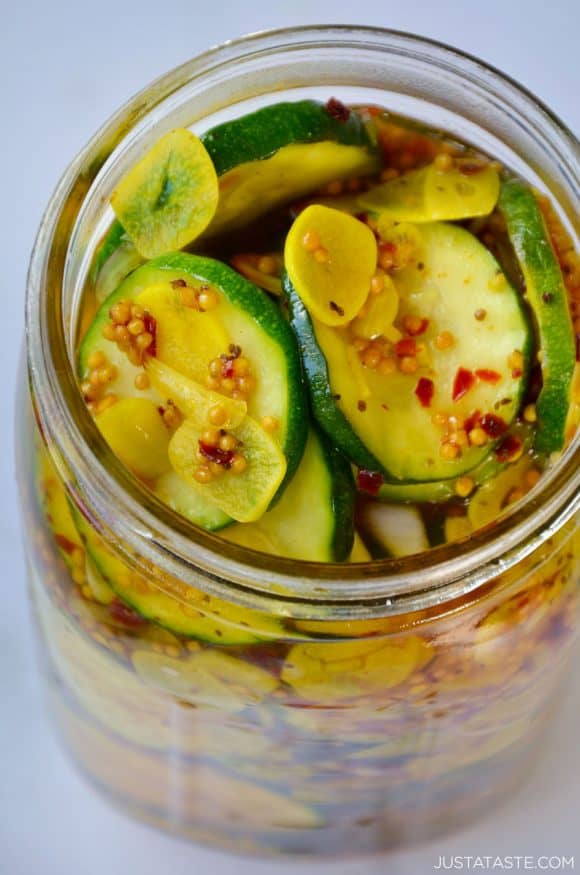 Cucumbers have been kicked to the curb in favor of summer’s star produce: zucchini! They make for tender, sweet and sour pickles that are perfect for topping sandwiches or snacking on straight from the jar. 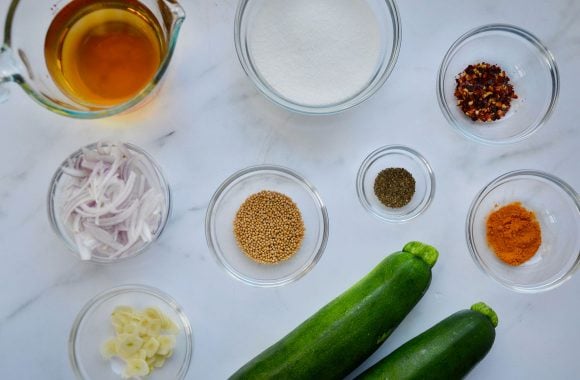 While the below knife isn’t necessary, it’s hard not to love a bread and butter pickle with the characteristic ridges. This special tool creates waves in whatever it cuts and would also be ideal for DIY potato chips. 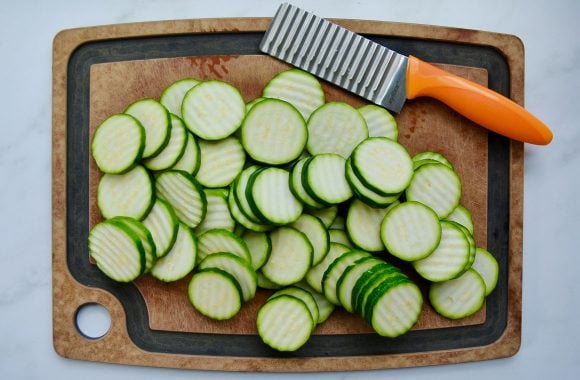 Slice up the zucchini as thick or as thin as your heart desires, then plunge them into a garlicky brine flavored with turmeric, celery seeds, mustard seeds and an optional pinch of crushed red pepper flakes. Because nothing says “summer is here” quite like a tall jar of pickled veggies! 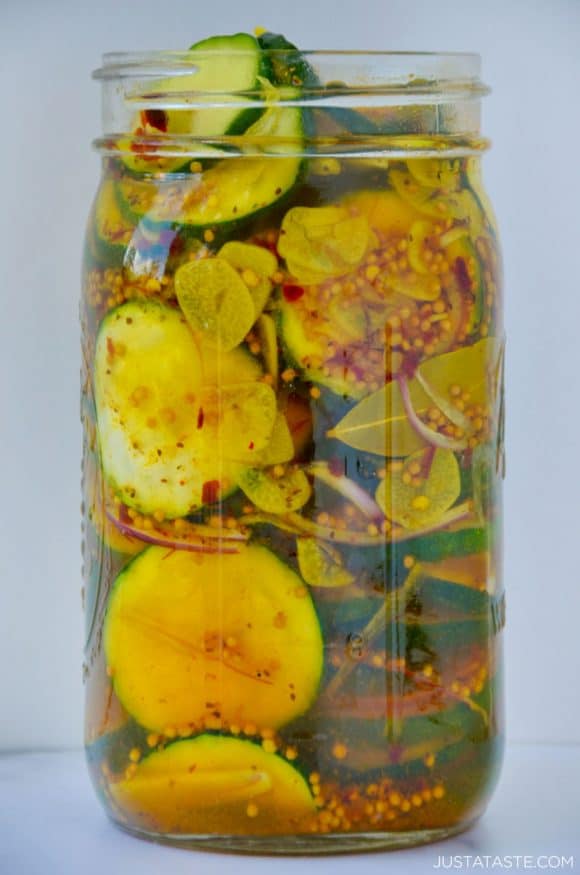 Tender, sweet and sour Zucchini Pickles that are perfect for topping sandwiches or snacking on straight from the jar.
5 from 1 vote 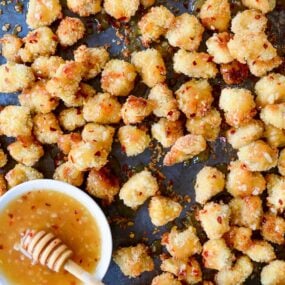 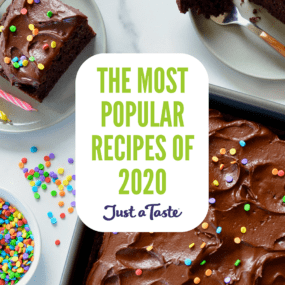 The Most Popular Recipes of 2020 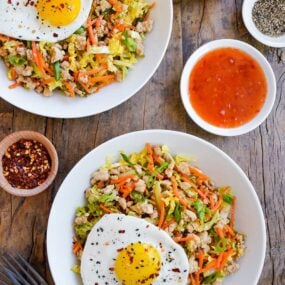 Healthy Egg Roll In a Bowl